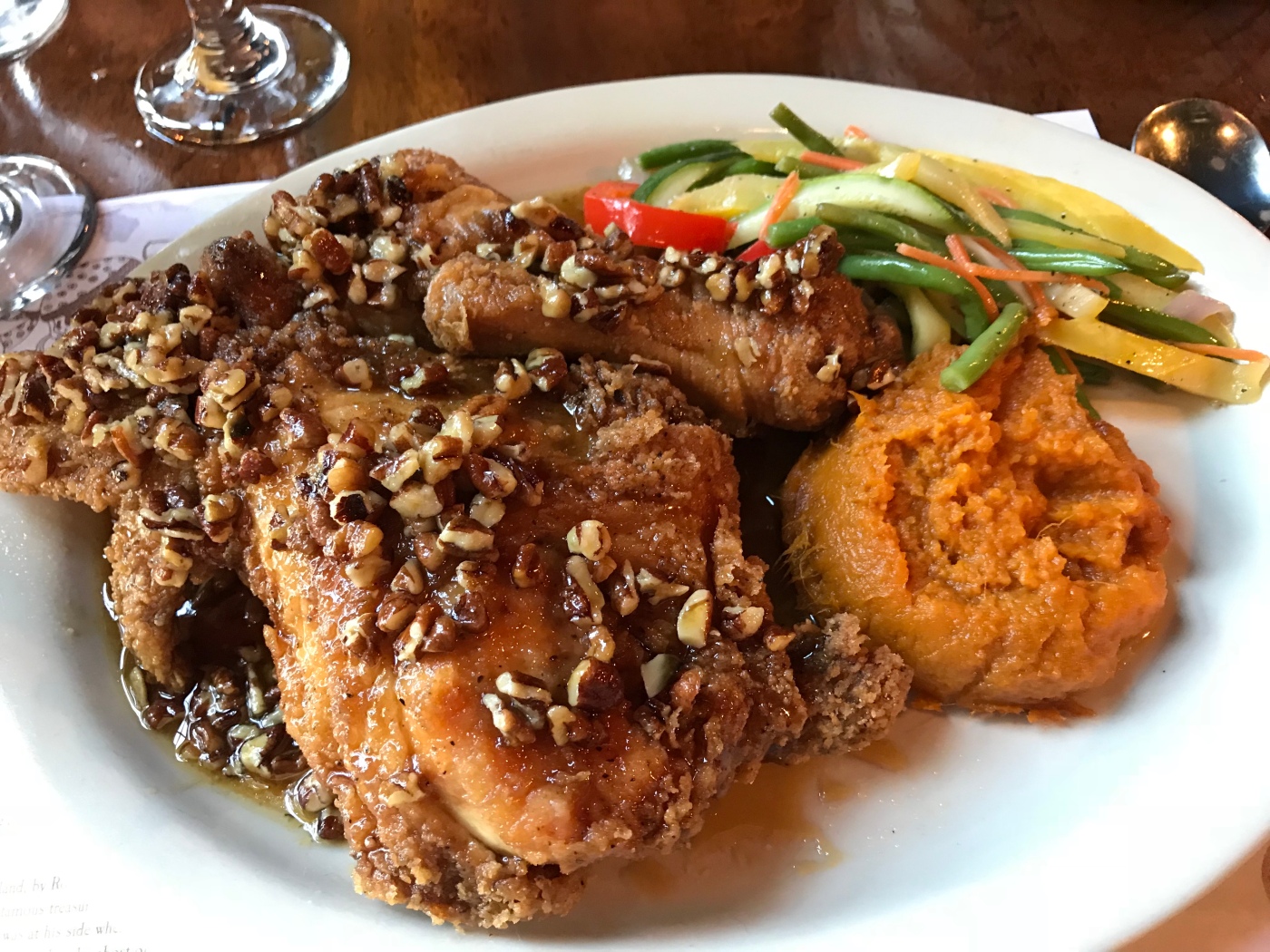 My last blog post featured a fun glimpse into what my life is like as I travel with my constant frienemy, pain. But travel is also interesting when you are attempting to, once again, reach a healthy weight. And you are in Savannah, Georgia, a place brimming with absolutely yummy offerings. And you have already lost 26 pounds and don’t want to blow it. And there’s—gasp—the best fried chicken ever.

I began the week doing okay with my eating. Breakfast and lunch were usually one meal crammed together and were well within the scope of not over-indulging. I allowed myself shrimp and grits a few times for dinner. Okay, three times, but do not tell anyone. And this is big: I had dessert only once and it was an itty bitty Key lime pie and we all know that Key lime pie is my Kryptonite. So I was doing okay, not feeling like Sophia, the emotional support pig in the jewelry store who probably leads a more fulfilled life than most people, thinking I could emerge from the trip with little or no weight gain. Then came the fried chicken.

The Pirates’ House restaurant in Savannah is known for two main things: being one of the most haunted buildings in the city and the honey pecan fried chicken. We went there on our last night, and I knew before going that a little bit of chicken fried would be landing in my stomach. When it arrived before me, it was a beautiful sight. I inhaled that unmistakable fried chicken smell and admired the beautiful honey pecan topping.

Then I took a bite. Oh my gosh, the taste. Salty, sweet, tender, crunchy, uber-yummy taste of heaven. So I ate more. And more. And more. I rationalized that since white meat chicken is a free food on Weight Watchers the entire breast I consumed was mostly free. Not. I ate most of the chicken. Most of four pieces of fried chicken. I didn’t eat the sides, though. Nope, no mashed sweet potatoes or vegetables for me. No, sir. I stuck to the meat only.

We walked back to our room and packed for the trip home. Then the stomach discomfort began. Followed by pain, waves of nausea, and the feeling that I was going to hurl. But since I will do almost anything to not hurl (and yes, this is why my eating issues have never lead to bulimia), I lay on the bed while Bill brought me Alka-Selzter, then Gas-X, then just watched as I tried not to move a muscle because every move brought on another giant wave of nausea.

Somehow I fell asleep and when I woke up my stomach had a bit of a hangover, but was otherwise okay. I was afraid to eat much for the rest of the day, and my mind was filled with eating remorse. Why had I eaten that chicken? Because it’s amazing. Why did I eat so much of it? Because it’s amazing. Will I eat it again? Probably. Will I eat as much? Hell, no. And that’s my lesson here. Go on vacation, eat little bits of the things I really love, but for the love of cats, don’t eat the whole thing. There will always be another trip with another food that awakens every taste bud. But I don’t have to eat the whole thing. Because, honestly, isn’t the first bite of anything the best? My taste buds know it is. Next time, though, I will have to remind my hungry eyes of this truth.

Read My Other Posts Here: