I’m not very kind to myself. Some would call that the understatement of the decade. Some would say it’s not true (although they don’t live inside my head). Those who know me best, however, would agree that I am consistently and relentlessly unkind to myself. I am working hard to change this unhealthy behavior, but it is a slow and annoying process. Changing one’s self-talk is like changing the way my cat talks to me—she doesn’t meow so much as give off a sound that is reminiscent of that sound at the beginning of an emergency broadcast. It’s kind of a loud “EHHHH, EHHHH, EHHHH.” But changing it to a normal and calm “meow?” This is what changing my self-talk feels like: impossible.

I know why I do this. I know where it comes from. I know who’s voice I am mimicking. It’s the voice of my mother, whose sadly low self-worth and mean self-talk turned to me once I came into her life. Over more than 54 years of having her voice in my life, her vision of me became my own. All of this is something I will write more about later. I don’t know when but later. She has been gone less than a year and it still feels like a betrayal to her to put those things out into the blogosphere. I will write about her more in-depth in time. But for now, I am certain that her voice has become my own unkind chattering, the one that goes on in my head all day, every day.

If anyone ever could get inside my head and hear me talk to myself, I’m sure involuntary commitment would not be far off. I tell myself I’m stupid if I so much as drop a packet of Splenda on the floor. I call myself fat no matter what the scale tells me. I swear at my hair for not cooperating but then it’s never cooperated so why is this an issue today? I berate myself for not saying “thank you” loudly enough when someone holds the door for me because what if they didn’t hear me? What then? What then with any of these things? Will mountains invert and become canyons? Will the sun reach its expiration date? Will the world actually stop turning? No, no, and…no. 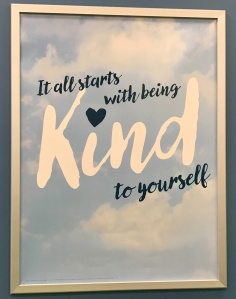 I saw this sign in my Weight Watchers meeting room yesterday: “It all starts with being kind to yourself.” As a word person, my first question would be, “And just why the hell is ‘it’?” But I know this sign is talking specifically about losing weight because, duh, it was in a Weight Watchers center. But in the broader sense, when I ask myself what “it” is, my only answer can be a better life. A happier life. One where I talk to myself as I talk to my awesome students: with infinite patience, kindness, and love.

As I travel ever onward, this is truly what I wish for my life.

Read My Other Posts Here: